Freedom in Entangled Worlds: West Papua and the Global Architecture of Power

“Here at last is the account I can unreservedly recommend to anyone interested in the courageous people and fragile geography of West Papua. Eben Kirksey makes accessible the unique imagery of West Papuans long subject to racism, corporate exploitation, and a brutal military. Marshaling impeccable scholarship, he transcends conventional political ideology to define a form of conflict resolution relevant to many ‘entangled worlds.’ Bravo!”
-Max White, Amnesty International USA

"In this remarkable book, Eben Kirksey attends to West Papuan indigenous thinkers and activists as they craft practical, surprising, and generative freedom projects in the fissures of power exercised by Indonesian occupiers, global financial interests, and foreign governments. Freedom in Entangled Worlds is shaped by explorations of complex messianisms, attention to the pragmatics of unexpected collaborations, and Kirksey's own unassuming and sustained commitment to the worlds and dreams of his West Papuan teachers."
-Donna Haraway, University of California, Santa Cruz

“[A]n extraordinary and also risk laden piece of fieldwork. . . ." Deleuze and Guattari's figure of the rhizome is pushed into arboreal realms. Kirksey's "banyan is both domination and subversion, growing down toward the dirty but nourishing soil of history and up toward the light of future possibilities,”
- Celia Lowe, Kroeber Anthropological Society Journal

“With its highly creative, mid-range theoretical innovations Freedom in Entangled Worlds will be of special interest to theoretical anthropologists studying social movements. Its brevity and adventurous tone will make the book an excellent fit in a theory class for talented undergraduates or junior grad students. Although I enjoy dabbling in French post-structural literary theory and psychoanalysis it has never been clear to me until now just how we are to connect that to the ethnographic. I felt that I came away from this book with a clearer understanding of some difficult primary authors and an appreciation for how anthropology can be relevant on a global stage.”
- Matt Thompson, Savage Minds--a collective anthropology blog

"Freedom in Entangled Worlds is not a dry academic book. Kirksey writes with verve. His analysis is sharp, his writing engaging. Kirksey draws the reader in. Not content to seduce the reader with tales of suffering – although he does that without recourse to sentimentality – Kirksey inspires solidarity."
- Jason MacLeod, Inside Indonesia

“Readers cannot help ask themselves at what point does the consumer of these resources also take responsibility for their first world lifestyle? Eben Kirksey answers that questioning by finishing the book with a call for an ethical and political transformation through the imaging of open-ended possibilities, a powerful lesson he learnt from imbuing the spirit of the merdeka and so the spirit of the land of West Papua.”
- C. F. Black, Leonardo Reviews

"In a page-turning blend of cultural analysis, human rights reportage, and ethnography, Eben Kirksey documents the West Papuan freedom struggle. In the process, he provides keen insight into the movement's dynamics and the desires that have led West Papuans to rise up against seemingly insurmountable odds. Kirksey clarifies the possibilities and predicaments they face, and he makes sense of the multiple times, mundane and messianic, in which many West Papuans seem to live."
—Danilyn Rutherford, author of Laughing at Leviathan: Sovereignty and Audience in West Papua

I first went to West Papua, the Indonesian-controlled half of New Guinea, as an exchange student in 1998. My later study of West Papua's resistance to the Indonesian occupiers and the forces of globalization morphed as I discovered that collaboration, rather than resistance, was the primary strategy of this dynamic social movement.

Accompanying indigenous activists to Washington, London, and the offices of the oil giant BP, I witnessed the revolutionaries' knack for getting inside institutions of power and building coalitions with unlikely allies, including many Indonesians. I discovered that the West Papuans' pragmatic activism was based on visions of dramatic transformations on coming horizons, of a future in which they would give away their natural resources in grand humanitarian gestures, rather than watch their homeland be drained of timber, gold, copper, and natural gas. During a lengthy, brutal occupation, West Papuans have harbored a messianic spirit and channeled it in surprising directions.

This book is about West Papua's movement for freedom when a broad-based popular uprising gained traction from 1998 until 2008. Blending ethnographic research with indigenous parables, historical accounts, and narratives of my own experiences, the book argues that seeking freedom in entangled worlds requires negotiating complex interdependencies.

Google Books offers a searchable on-line preview of the book.  Scribd lets users download a free copy of the Introduction.

The paperback edition is available in West Papua from Elsham Papua and in the United States from ETAN (for $25.00) Proceeds from these sales will support human rights work in West Papua.

In Australia, affordable copies are avaiable via the on-line search tool Booko.com.au.
Posted by Eben Kirksey at 7:21 PM

KIRKSEY, S. E. 2012 "Thneeds Reseeds: Figures of Biocultural Hope in the Anthropocene" in G. Martin, D. Mincyte, and U. Münster (eds.) Why Do We Value Diversity? Rachel Carson Perspectives vol 9: 89-94. 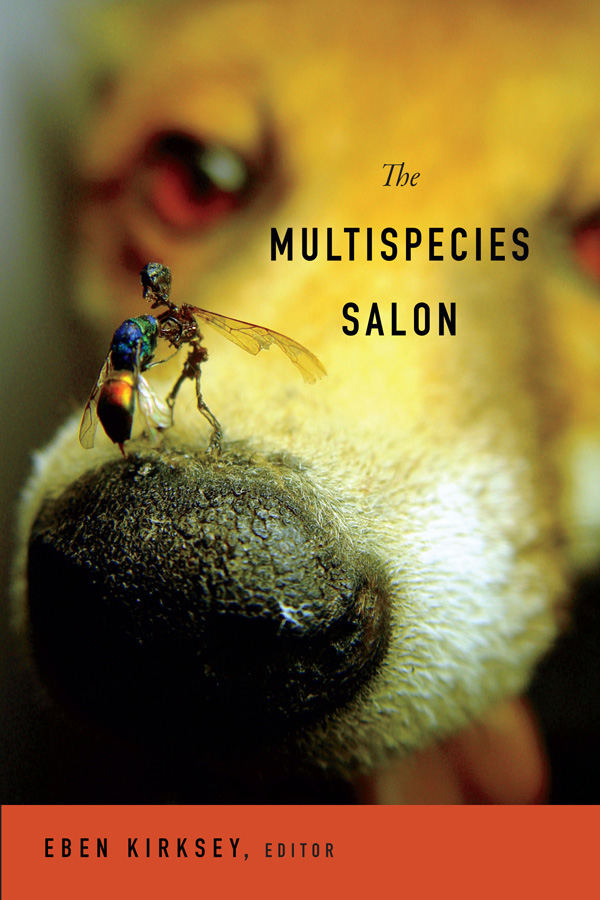 Eben's edited collection, The Multispecies Salon, explores a series of entangled questions: Which species flourish, and which fail, when natural and cultural worlds intermingle and collide? What happens when the bodies of organisms, and even entire ecosystems are enlisted in the schemes of biotechnology and the dreams of biocapitalism? And finally, in the aftermath of disaster--in blasted landscapes that have been transformed by multiple catastrophes--what are the possibilities of biocultural hope.

Writing in collaboration with Stefan Helmreich he coined the term "multispecies ethnography" to describe new approaches for studying contact zones where the lines separating nature and culture have broken down.
Eben first went to West Papua, the Indonesian-controlled half of New Guinea, as an exchange student in 1998. Later he discovered that collaboration, rather than resistance, was the primary strategy of a dynamic social movement in West Papua. Duke University Press published this study as a book,Freedom in Entangled Worlds, in 2012.